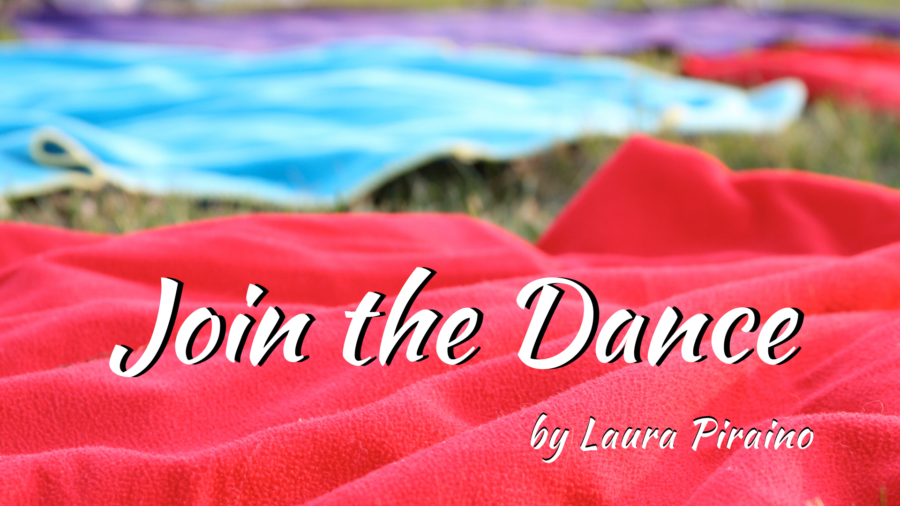 I watched a Ted Talk the other day and saw the most amazing video.  It began with a park full of people seated on picnic blankets enjoying a beautiful day.   In the middle of the park, right in the middle of all of the people and blankets, a man stood up and started to dance!  This dance was no ordinary dance.  With everything this man had he was flailing his arms and kicking his legs.  He was dancing a dance completely uninhibited and unconcerned about who was seated around him.  This man was dancing hisdance and he was all in!

The people on the picnic blankets around him noticed the dancing man, but most glanced up and then went back to what they were doing before the dance began, back to their conversations, back to their picnic lunch.  But not one man.  One man in the crowd saw the dance, found it irresistible, got up from his blanket, and joined the dancing man.   Two people were now dancing in the middle of a park full of people enjoying a beautiful day.

Within a matter of seconds, these two people became a group of four as two more people left their blankets and joined the dance.  Four people then became eight, eight quickly became sixteen…and then it happened.  All at once, people too many to count came from every direction, leaving their picnic blankets behind they joined the dance.

Something irresistible was going on at the park that day and those who saw it wanted to be a part.

In 1 Samuel 16 we are introduced to David, a boy anointed as king, a shepherd who spent countless hours alone with his sheep, alone with God.  It was during these years that David experienced the presence of God as he guarded the sheep and played his lyre.  These moments in the presence of God were times that he never forgot.

Years later, we find David in the palace.  Removed from the fields of Bethlehem, this man is now seated on the throne in Jerusalem.  God’s promises have come to pass in his life, but one thing is missing.  David again longs for the presence of God.  The Ark of the Covenant, the place where God’s presence dwelt, has been far away for a long time.  King David knew it was time to bring the Ark back.

So David got up.   He went to the place where the Ark of the Covenant was located.  He watched as the Ark was put in position to travel safely.  He witnessed the sacrifices that took place as the ark began its journey home.   The presence of God was returning to the people of God!  It was all David had wanted!  This king was overwhelmed as He encountered God’s presence once again!    King David responded in the only way he could.  King David danced before the Lord!

Wearing a linen ephod, David was dancing before the Lord with all his might, while he and all Israel were bringing up the ark of the Lord with shouts and the sound of trumpets.  1 Samuel 6:14-15

There had been other dances in Israel’s history.   Looking through the Bible we see other men and women dance before the Lord.   But this dance was different.

The word used for dancehere in the original language is a word that literally means ‘whirling and leaping’. It is the only time that this word for dance is used in the entire Word of God.  No other dance in the Bible is like the dance that Kind David danced when the presence of God was brought back to the people of God that day.  We read elsewhere that this dance could have been viewed as undignified, but to King David, it was his only possible response to experiencing the overwhelming presence of God!

With all that he had, in front of a crowd, uninhibited and unashamed, Kind David danced his dance with all of his might, a dance that had never been danced before.

Something irresistible happened in Jerusalem that day.  It started with one man dancing his dance in the middle of a people, completely unashamed and it ended with a whole nation in the streets celebrating before their God.

All because one man decided to dance.

Something irresistible is happening in the church today.  God is pouring out His presence in new, amazing ways as we worship as a body. The Spirit of God is moving as we step out of the doors of the church taking the Gospel to the streets and communities.  Hearts are being changed as we follow Jesus, loving people where they are, selflessly serving those in need.

God is shaking up the way we have always done church, shaking up the methods and ways that have always been in order to shape His bride more and more into the image of the Son.  We are on the verge of something amazing, but we have to get up from our blanket.  We have to join the dance.

It just starts with one…

We will see the irresistible presence of God move in a new way in the hearts of those around us as one by one, two by two, three by three and countless others in the park leave their blankets, run to Jesus and join the dance.   Lives will change and God’s Kingdom will grow.

There is an irresistible dance waiting for you.  It starts with a step, which leads to a leap, and becomes a beautiful dance choreographed by God just for you!

Friend, what are you waiting for?  What has God called you to do?   Perhaps it’s time to get off the blanket, put one foot in front of the other and dance your dance!

Oh the glory that is waiting in the whirling!   There is nothing like being in the presence of God!

He creates each of us by Christ Jesus to join him in the work he does, the good work he has gotten ready for us to do, work we had better be doing. Ephesians 2:10 (MSG)