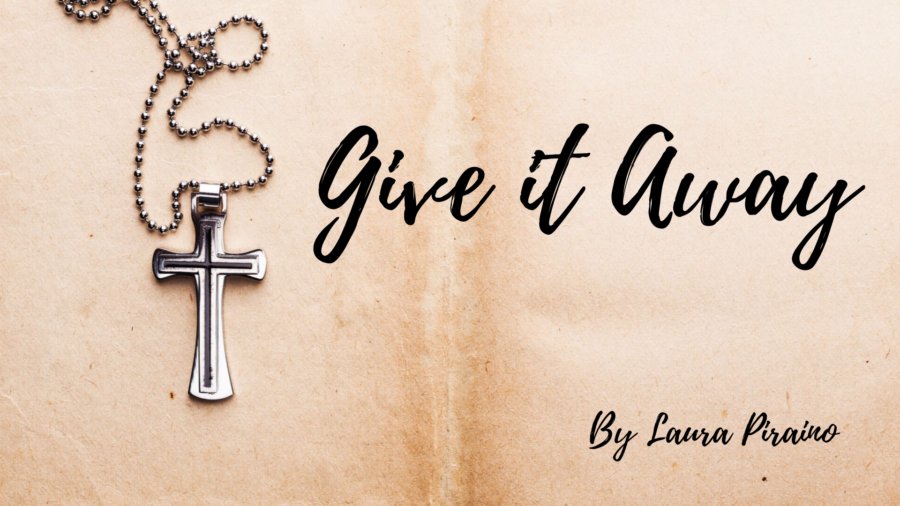 My parents were always amazing gift givers. Together they spent weeks well in advance of birthdays and Christmas planning out their strategy to find the perfect gifts to present to my sister and me. If something was on our list, even into our adult years, my dad and mom would go to great lengths to make our wishes come true.

One year I asked for a cross necklace so I was not surprised on Christmas morning to see a jewelry sized box under the tree with my name on it. I opened the box and saw that it held a beautiful silver cross. It was petite and delicate with intricate scrolling on the sides. I loved this cross immediately and wore it as much as I possibly could.

Little did I know that day as I hugged my dad to thank him, that just two months later he would pass away. This small, silver, scrolled cross would be the last Christmas gift my dad would give me. I planned on treasuring it forever.

Things don’t always go as we plan. A few years later on a Friday night in April, in an evil, calculated and painful way, our home was invaded. A group of thieves broke our skylight and lowered themselves into my kitchen with a ladder. They stole from our home all of the earthly goods that we treasured. Among what was stolen was the small silver cross necklace I had planned on treasuring forever. My heart was broken as I grieved the loss of this very special gift.

At a women’s conference later that year, I spoke about the pain and loss of the robbery and I shared with the ladies the story of my cross. It was an emotional moment for me that God used to speak to all of us in the room that day. At the conclusion of the event, a woman I had not met before walked up to the platform. I noticed she was wearing a necklace. A small silver cross. With tears in her eyes, she told me the story of her cross, a gift from her mom, which made it just as special as the cross that had been given to me. We quickly connected as we shared a similar story. As we finished speaking, she put her hands behind her neck and unlocked the clasp that held her necklace in place.  She took her off her cross. And she gave it to me.

I tried to refuse this gift that was placed in my hands. I understood how it felt to no longer have my cross and did not want to receive what she treasured so highly. I know the value that comes with such a gift, but she insisted. She said that while I was speaking at the conference, God was speaking to her about her cross. He had told her to give it away.

John 6 is where God has had me camped out lately. I have read and reread the story of Jesus feeding the 5,000 in each of the four Gospels in multiple translations, seeing different aspects of the event come together to create one amazing story. Jesus and his disciples were on a hillside for a time of much needed rest. A crowd of people who witnessed Jesus perform miracles had followed them there. The Bible says that 5,000 men were in attendance, but we know that the total number of people was significantly higher as this number did not account for women and children in the crowd that day.

It was late and the multitudes were getting hungry. Jesus saw their need and put the disciples on the job. Unsure of how they could possibly be used to feed the masses, the disciples set out to see what they could find. Andrew, Simon Peter’s brother, saw among the people a boy with a small lunch and spoke up saying,

“Here is a boy with five small barley loaves and two small fish, but how far will they go among so many?” John 6:9

Seated among the masses was a young nameless boy. If we dig into the story further, not only was he nameless, he was not counted. The Bible specifically states that he was not yet a man. Only men were counted in the 5,000 that day.

Looking at the crowd that day, it would seem that this boy’s attendance was an insignificant part of the story. There were thousands of people seated on the hill so it would have been easy to pass him by. When the disciples went to look for food, it would have made sense that someone more significant, someone who counted, would hold in his hands the solution to the problem.

But this boy held exactly what Jesus would use to perform a miracle. Five loaves and three fish didn’t look like much, but willingly, he took what he had and he gave it away.

But as he watched from his seat on the hill, the boy saw Jesus do something unexpected. Jesus took what was given. He blessed it.

And then He broke it. Piece by piece, Jesus took what the boy had given and broke it into pieces, thousands of pieces. What he had given to the Master no longer looked the same as it had as before he gave it away. I have to wonder what the boy was thinking as he watched Jesus break what he had given on the hillside that day.

As Jesus continued to break the bread and the fish, miraculously the food began to multiply. Baskets full of broken pieces were distributed to the crowd and everyone was satisfied, completely filled.

Everyone. Including the boy. He had no idea when he gave his lunch away that he would eat that day, but Jesus saw his gift, knew his name, and counted him among those who would be filled.

It was in the breaking that the miracle occurred.

There is not one of us out there that has not been in this boy’s shoes. Moments, days, weeks or years of feeling nameless, like we haven’t been counted as significant in one situation or another have kept our fingers tightly clasped to the very thing that God has put in our hands purposed to work out a miracle. Comparison, insecurity and painful places have caused us to hold onto what we have been called to give away. We go back and forth with thoughts and questions in our hearts and heads. We are ready to run with God’s plan if we give what we have to Jesus and He blesses it.

But what if we give what we have to Jesus and He breaks it?  What if it doesn’t look any longer like it used to look?  Can we trust His Hand in the blessing and in the breaking as we obediently let go of what we hold onto and give it away?

Perhaps we will find the real blessing is in the breaking. The breaking leads to unexpected stories woven by the Hand of God purposed for our good to show His glory to the world. I will never forget the healing that came over my heart as a woman heard from the Lord, took off her cross and gave it to me. I was able to find her name later and shared with her how God had impacted my life for the Gospel and the story that has been shared because she gave it away.

We give what we have to Jesus. He blesses it. He breaks it the way He sees fit. He multiplies it for His purpose and nothing is wasted.

Trust him in the blessing. Trust Him in the breaking. Hear His voice, open your hands, let go of what you have, and give it away.

When they had all had enough to eat, he said to his disciples, “Gather the pieces that are left over. Let nothing be wasted.” John 6:12