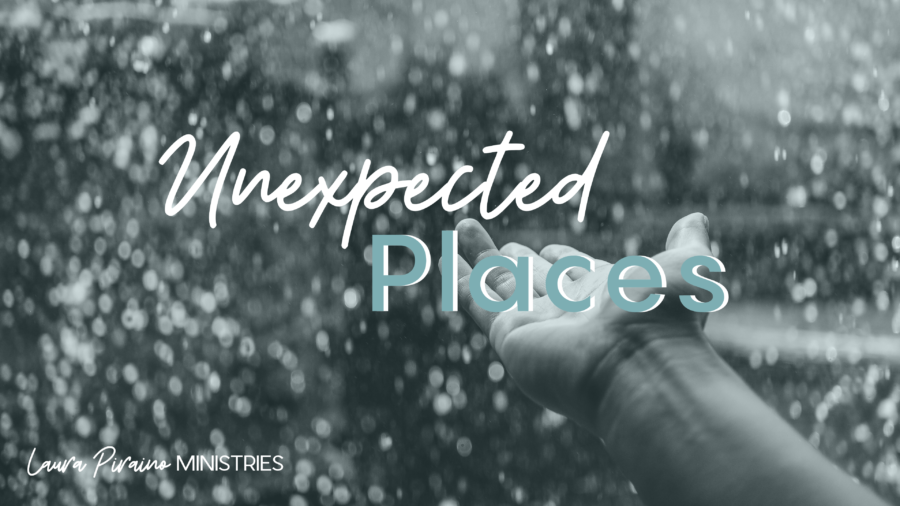 They were selling umbrellas as we walked through the gates to Victoria Falls.  With the African sun shining bright and strong, we certainly didn’t feel the need to stop and make a purchase! We started our journey down the path to the falls and began to see people coming our way.

Laughing and talking in excited tones these folks caught my attention, but what kept my eyes fixed on these tourists was their hair and their clothes.  From the top of their heads to the shoes on their feet, they were completely drenched!  It was a bright sunny day and we were still quite a distance from the falls.  I wondered where they had been and kept on walking.

We continued down the dry, hot path for quite a while, each step the same as the last, and then it happened. Out of nowhere water began to fall from the sky.  It fell on our heads and ran down to our feet.  With just one step we walked into something unexpected.

A sign on the side of the path told us that we had entered a rain forest created by the falls.  As the falling water hits the river below, it produces a spray that rises up and covers this particular part of the path.  Twenty four hours a day, seven days a week, twelve months a year in this one place, rain falls continuously.  It never stops raining!  The ongoing rain creates an ecosystem in this space behind the falls unlike any other on the planet.

With just one step our journey had completely changed and yet were on the same path.  We had not veered off of the path to go another direction.  We had not chosen to go our own way, but the path we had been obediently walking looked nothing like it had just a few steps ago.  We found ourselves in a completely unexpected place.  Covered in rain.

As the shock wore off we opened our eyes to the scenery around us.  The flowers and trees that surrounded us were those we had never seen before.  Insect life in this new ecosystem was unlike insect life in any other place.  What we saw on this part of the path was unique to this place with a beauty we had seen no where elsewhere.

Without umbrellas, saturated with rain, we started to laugh!  With arms stretched out, we took in every drop, every moment, every emotion that came with this brand new place.  Dripping wet, none of us wanted to leave as we lingered in the rain, appreciating the unexpected place where we now stood.

Many years ago, three women found themselves on another path. In the desert outside of Moab, a woman named Naomi walked with her daughters in law, Orpah and Ruth.  It had been a difficult season for these women as each had suffered the loss of their husbands and the city where they lived was experiencing a famine.  They were leaving their home on a journey they had not expected.  Grieving, hungry and tired, they walked together.

But Ruth made a different choice.  When given the chance to go back to the place where she had always been, Ruth continued on her new path.  Honoring Naomi, she kept walking on the path to Bethlehem, even if she had no idea what was coming her way.

Following God and faithfully serving her mother in law, Ruth found herself in an unexpected place.  To provide food for Naomi and herself, Ruth went to work gleaning in the fields of a kind and wealthy land owner named Boaz.  With no idea where the path was leading, she faithfully gathered the left behind grain, each day just like the last.

But then one day it happened.  Ruth took one more step on the path and found herself in a very unexpected place.  Boaz in his role as kinsman redeemer made the choice to marry Ruth.  Ruth’s whole life changed in an instant!  Once a poor woman gleaning grain in the fields, she was now married to the master of the house.  Once a grieving widow, her deep sorrow was replaced by unexpected joy.

You can almost picture her, arms open, smiling, laughing and loving this place as the rain of grace fell on her filling her from the inside out.  She had endured loss, lack and grief but with just one more step, Ruth found herself in a place she had not expected.

Nothing in this woman’s life would ever be the same.  Life here would look different than any other life she had known.  Saturated by the love of her redeemer, Ruth was given new hope, provided a future, blessed with a baby and a family line that would lead to the Messiah.

It was the same path she had traveled for a very long time, but it led to the unexpected and oh, the joy Ruth found as she experienced the rain.

As we walked the path back to the entrance of Victoria Falls on that hot summer day, new visitors were now on the path.  People who were still completely dry were coming our way.  As we approached them, still drenched by the rain, I am sure they wondered where we had been.  They would soon find out for themselves.  We had been caught in the rain of an unexpected place.  We had seen things that we would see nowhere else and we had experienced life that we did not know was possible before we went to the falls.

…and grateful that we had not purchased an umbrella.  An umbrella would have kept us from experiencing every beautiful drop of rain that this unexpected place had to offer.

Predictable places provide predictable results, but unexpected places will take us to where we have never been.

Have you taken a step into an unexpected place?  Have you found yourself in the rain?  Throw back your arms, open your eyes.  Take in every sight, every emotion, every drop of rain that falls your way.  Experience it all.  Welcome the rain, embrace it….and don’t buy the umbrella!

How deeply intimate and far-reaching is his love! How enduring and inclusive it is! Ephesians 3:18 TPT