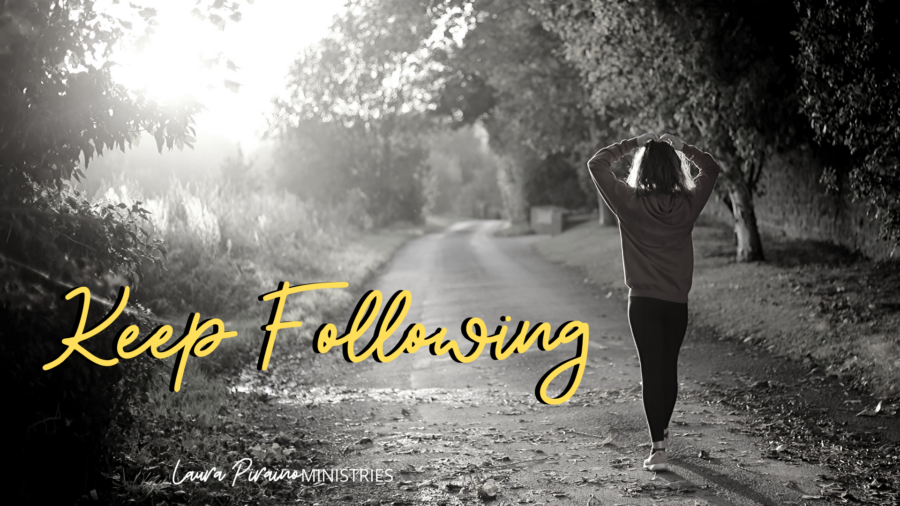 I’ve found myself walking a lot these days.  Maybe you have, too.

A park close to my house has become my daily destination.  While it’s not a particularly large park, woven throughout the fields and play area is a loop with twists and turns equating to a mile.  The loop starts at a bridge and ends there as well.  Once you are on the path, you stay on the path, or so I thought.

The park is usually full of people walking together.  Small and large groups of men and women enjoy each other’s company as they follow the path.  I am no different as I am usually found walking with a friend.  Almost in sync we walk in line with the others.

In this new season we are living, the path looks different as fewer people walk at the park.  There are no longer large groups of people to follow and these days I am walking alone.

Last week as I made my way around the loop, my head was down and my hands were busy as I searched for a particular playlist on my phone.  I could see past my phone to the pavement beneath my feet so I was confident that I would not fall off the path and into the grass.  Satisfied with the music I had selected, I put my cell phone in my pocket and lifted my head, but what a surprise I had when I realized that during my walking, I had wandered from the path.

Off to the side, at a place I had not noticed before, the path breaks in two directions.  One way leads off the path, the other stays on.  They are both paved.  They look the same.  I had never considered this other way because all of this time, I had been one of many people following the path together.  As those in front of me rounded the corner, I did the same, following them.

There is something that feels safe and reassuring when we are all physically following the path together.  As we enjoy the fellowship of others on the path, there is a joy in the journey that makes it easy to follow.  With our eyes fixed ahead, surrounded by others, we are encouraged to follow the together.

What happens when being a follower means we physically follow alone?

Mary Magdalene was a follower of Jesus.  Prior to meeting the Master, she had been bound by seven demons, but He had set her free.  In her freedom, she chose to follow.

Through surrounding villages and towns, near the sea and on the hillsides, people came to Jesus for healing and deliverance.  As He performed miracles, fed multitudes, taught of the Kingdom of God and moved in ways that were easy, enjoyable, and life giving multitudes of people began to follow Him as well.

Surrounded by crowds, through the seemingly easy times, Mary followed Jesus.  He taught her how to follow in these times surrounded by many, knowing that things would be different ahead.

From Galilee, Jesus’ path led to Jerusalem.  Following Him here would look very different than following Him there.  While crowds celebrated His triumphal entry, they quickly took up a different cause as they crossed to the other side and cried out for his crucifixion.  Mary became one of a small group who continued to follow.

The crowds stopped following, but not Mary.  Along with the disciples and some other women, they became a small group of followers committed to the ways of Jesus, but even this small group would soon fall away.

On the night he was betrayed, many of Jesus’s followers ran the other way.  Afraid, ashamed, uncertain as Jesus walked to the cross, they were nowhere to be found.  As Jesus was crucified, seated at the foot of the cross were only three.

The crowd had gone down to just three.  Mary, John and Jesus’s mother had followed Jesus here.  To this painful, lonely, uncertain place.

Mary could have decided as she walked away from the cross that her following was over.  Jesus was dead, life was uncertain and she was alone.  Removed from the crowds, she could have put her head down and wandered off the path, but most magnificent part of Mary’s testimony is this.  In the moment of her deepest pain, when it looked like she was alone and everything she believed in and lived for was gone…

It would have been easy to stay in her home the next day feeling hopeless and in a state of despair, but Mary got up early and continued to follow Jesus as she went to where His body had been buried.

The crowds were gone, the small group had run.  John tells us of the moment at the tomb where it came down to one.

Mary stood alone that day and looked into the empty grave. Seeing that the body of her precious Jesus was no longer present brought her to an even greater grief.  The Bible says that Mary wept aloud and alone lamenting over the loss she felt deep in her soul.

An angel appeared at the tomb and asked Mary why she wept.  The grieving woman gave a reply and her weeping continued.

But then Jesus appeared.  He asked the very same question the angel had asked and again Mary replied.  Unlike the angel, Jesus answered by calling her name.  ‘Mary…’

It is implied that Mary wanted to run to Jesus and hold onto Him in this moment.  I can imagine she wanted to never let her beloved teacher go but Jesus told her no.  He had a job for her to do, a mission to be filled in this unexpected time.  Jesus told her to go to those who used to be on the path, those who had stopped following Him…

…because of their fear

…because things looked dead and hopeless around them

…because the story didn’t go the way they thought it was going to go.

She was to tell them that He was alive and because of that, following even in the hardest, darkest, loneliest moments would lead to a place of life and an encounter with Him that they had never experienced before.

Mary Magdalene had lived it, experienced it and now face to face with her Savior, Jesus sent the one who had followed to those who had not in order to bring them back to the path of life.

If we follow Him here, it will lead to a place of life as He sends us out with a mission.  To care for the hurting, to bind up the broken, to bring back to the path those who have put their heads down and have walked another way.

Mary Magdalene went to the disciples with the news: “I have seen the Lord!” And she told them that he had said these things to her.  John 20:18