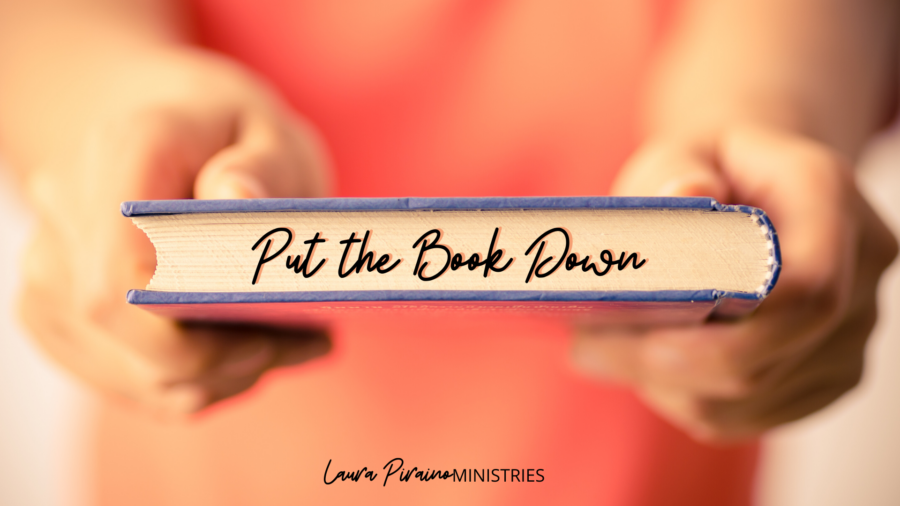 I have an object lesson in my mind as I write these words.  It’s a picture that I strive to remember as I navigate relationships in my life.  If we were together, I would demonstrate it for you to see, but since we are not, perhaps you can picture yourself doing what I describe for you here.

Take a quick look around and pick up the closest book that you see.  For me, it happens to be a recipe book, evidence of how I have spent my days these past few months in isolation!  Now with two hands, hold the book you have chosen out in front of you, one hand on each side with the cover facing forward.

If you have a friend or family member with whom you have walked this challenging time, feel free to use their help in this lesson.  If not, imagination works fine, too.  Have your friend stand in front of you, perhaps three to four feet away.  Start walking toward your friend keeping your arms extended.  Eventually, you will meet.  The book will be the first thing to run into the person standing in front of you.

It’s a phrase we use quite often.  We are told, or tell our children, not to hold something against another person.  We know what it means.  When a friend, acquaintance or even someone we have never met face to face, says or does something that does not align with what we think or believe, when we feel that our opinion or emotions don’t count to another individual, we pick it up.  We stretch out our arms.

And we hold it against them.

With locked elbows, we stand face to face but worlds apart, with an empty space between.  An empty, broken gap.

Taking offense, holding something against someone else is nothing new.  In fact, we see the very first story of offense in the first book of the Bible, in one of the very first chapters.

Genesis 4 tells us of the story of Cain and Abel, two brothers, the sons of Adam and Eve.  Each one had his position in life.  Cain worked the land, Abel kept the sheep.  When the time came for the brothers to present an offering to the Lord, Abel brought an offering from his flocks, Cain brought an offering from the land.  While there are various thoughts on why, God looked with favor on Abel’s offering, but did not do so with Cain’s offering.  The Bible says that this made Cain angry.

Rather than taking these emotions to the Lord, Cain took offense.  He chose to pick up this offense with both hands.  He held onto it tightly and started to walk toward his brother.  With anger and unforgiveness in his heart, the closer he got, these destructive emotions were held out.

Cain held his offense against his brother.  Abel may have had no idea of the offense as he was just presenting his offering to the Lord, tending to the sheep, but the emotion brewing in Cain’s soul was growing every day.

With Cain’s locked elbows, the space between the brothers became harder to gap.  Anger gave way to action as Cain walked with Abel out to a field.  For a moment, Cain put down the offense that he held onto so tightly in order to use his own hands to attack Abel.  With that attack his brother, a part of his family, one he had done life with from the beginning, died.

Cain’s offense against his brother destroyed his brother, damaged a family and left him a restless wanderer on the earth for the rest of his life.  (Genesis 4:12 NIV)

How easily this story could have gone a different way.

What if when Cain was offended, he brought the matter to the Lord?

What if when he brought the matter to the Lord, Cain humbly recognized the error of his ways?

What if he chose to submit to God’s sovereign authority and turned from his sin?

What if he put down the offense he had been holding in his hands, moved in close and had a conversation with his brother?

It is easy to pick up offense any day, but especially now.  With so many difficult situations in the world today, so many hurting people, so many uncertain aspects to life, offense can be easily taken.  We are living in unprecedented times.  We have been isolated in our homes, some have experienced illness or the loss of loved ones, we are navigating rules and restrictions and we are walking through the pain and grief of racial tension in this hurting, broken world.

Sadly, we are going to be offended.  But we have a choice.

When faced with an offense, we can hold the offense up, lock our elbows and start to walk right toward the one in front of us and hold the offense against him or her.  The end result of that walk will be anger, brokenness, pain, even the death of relationships with those we once held so dear.

Or we can do what Jesus did.  For years He walked on this earth while others questioned Him, betrayed Him, hated Him.  He had every right and would have been fully justified according to the standards of this world to hold the sins of those who offended him against them.

But Jesus didn’t follow the standards of this world.  He followed the standards of the unshakeable Kingdom.  Rather than picking up the offense, locking his arms and holding the sins of those around him against them, Jesus chose to forgive.  Rather than holding our sins against us, Jesus opened his arms, stretched them out wide and died.  In that one act, everything that we had done against Him was forgiven and the gap that had stood between God and man since Genesis 1 was closed.

God forgave us.  And the end result is the exact opposite of the consequence that took place in Genesis 4.  Families can now be made whole.  Brothers can be reunited and we have the opportunity to live out our days in the abundant life and blessing that come with obedience to the One True God.

Offenses will take place.  We will say and do things that we should not do and others will, too.  We will be misunderstood and we will misunderstand our neighbor.  But we have a choice.  We can hold onto those offenses, lock our elbows and start the walk.  Or we can humbly lay it down and open our hands in an attitude of forgiveness.

The next time we start to feel the emotions that come with offense brewing in our hearts, let’s grab the nearest book.  Hold onto it with two hands and think about the gap these emotions can create.  And then let’s put the book down.  Let’s put it back on the shelf, purposing to do the same with the feelings we are experiencing inside.

Let’s forgive and show gratitude when others forgive us.  We have a Savior who does not hold our sins against us, let’s be people who don’t hold the sins of others against them as well.

Make allowance for each other’s faults, and forgive anyone who offends you. Remember, the Lord forgave you, so you must forgive others.  Colossians 3:13