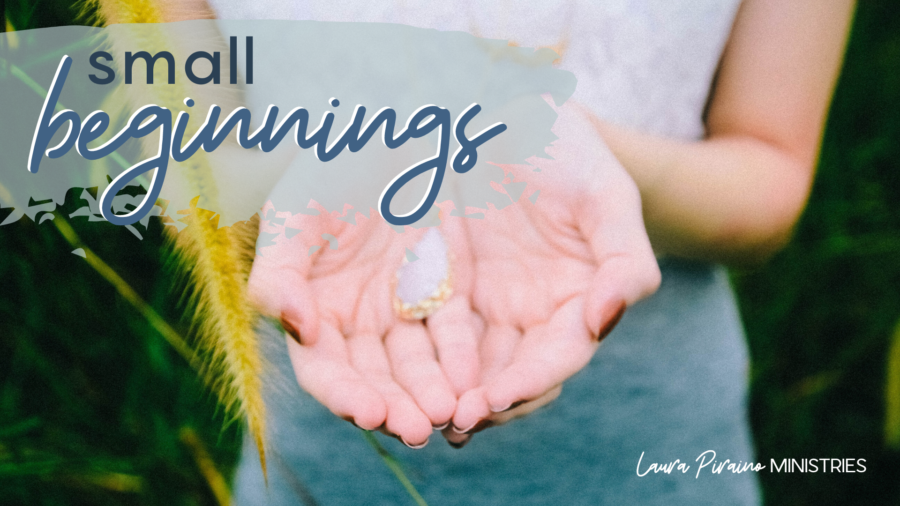 It’s funny how our perspective changes over time.  As young children when presented with beautifully wrapped gifts at Christmas or on birthdays, our tendency is to reach for the biggest box with the biggest bow.   We can’t wait until that box is in our hands because surely if the box is that big, the gift will be equally as wonderful!

But the older we get, the more our eyes shift.  From the biggest box…to the smallest.  We start to understand the old adage that good things come in small packages and often carry with them value that supersedes the value of the larger items around them.

I found this to be true this past Christmas as I opened a very small box from my daughter.  In it was a silver necklace engraved with words that are dear to my heart.  Alongside the necklace was a small handwritten note from her heart to mine.  Two small items held in a very small box.  Their value was not dependent on their size.  Both were small, but both were incredibly significant.

Toward the end of the Old Testament in the book of Zechariah, we read of a man named Zerubbabel.  Born into a Hebrew family exiled in Babylon, Zerubbabel had never lived in the hometown of his people, Jerusalem.  For years he had heard of the glory days of the city…the feasts and celebrations, the sacrifices and offerings, the way the people came together to worship Jehovah.  He had heard as a young boy of the temple that housed the very presence of  God and the priests who were honored to enter the most holy place once a year.  He sang of Jerusalem.  He mourned for it along with others who had been taken from their homeland, enslaved in a culture foreign to their own

Seventy years had passed since the exile and it was the appointed time that God would bring His people back.  God chose a group of men and women to return to the ruins of what was and prepare the way for what would be.  The first order of business was rebuilding the temple and Zerubbabel was assigned as lead on the job.  Upon coming together, the foundation for the temple was laid and the next step was ready to begin.

It was an exciting time!  Big things were happening and the people had cause for celebration but as often happens in times of great growth, resistance came and the work stopped for a season.  I can only image the emotion that pulsed through Zerubbabel’s soul as he walked by the unfinished temple day after day longing for the opportunity to complete what he began.  To see his work come to a halt must have been very painful.  I wonder if he questioned what he heard?  If he questioned the call?  He hadn’t anticipated it going this way.

This quiet time, this pause, may have seemed like the end, but the God of new beginnings wasn’t finished with Zerubbabel or the work He had called him to do.

Seventeen long years later, God called his servant back.  It was time to start building the temple again, to continue the work that God had called him to do.  Zerubbabel was a different man at this time, older, perhaps wiser.  He had lived through this God controlled pause and was ready to pick up where he left off so he reached for a tool to finish the job. With stones to be set and doors to be put in place, we might think that Zerubbabel would have chosen a large tool to accomplish all that needed to be done.

We might look at what was in the Zerubbabel’s hands and question the purpose of such a small thing in the face of the enormity of the call that God had put on his life.  Certainly God would put something much greater, much larger in his hands for such a time as this.  How could something so small be part of this new beginning?

God knew that Zerubbabel would need encouragement as he looked at what was in his hands so He gave his beloved servant a word through the prophet Zechariah.

Do not despise these small beginnings, for the Lord rejoices to see the work begin, to see the plumb line in Zerubbabel’s hand. Zechariah 4:10

We often despise small beginnings, but taking a deeper look at this phrase puts what we read into a different light.  The word for despise in the original language doesn’t mean ‘to feel contempt or hatred’ as we might define it.  The original word actually means ‘to consider insignificant’.

It would have been easy for Zerubbabel to look at this small start and consider it insignificant.  It had been a long, hard road.  The work God had given him to do should have progressed further by now.  This wasn’t where he thought he would be all of those years ago when he laid the foundation.  Why was the work still so small?

It would have been natural for Zerubbabel to look at the small tool in his hands and consider it insignificant as well.  He had a call on his life.  Years prior he had held other tools as he carried out that call and now he was ready to get to work, to see the glory restored, to hold something bigger in his hands.  But he held a plumb line, a small tool in comparison to other tools he had held before.  Zerubbabel could have seen it as small.

But God saw it as significant.

New beginnings don’t always start out big.  In fact they often start out small, but small doesn’t mean insignificant in the Kingdom of God.

Another year is behind us.  We have had time to reflect on and process the events of the past.  For some of us, we have come through a season of change. For others, our lives look very much the same.  Wherever you find yourself as the calendar turns, we have all entered something new.  A new year, a new decade…a new beginning.  I believe in this season, God is speaking the very same word that He spoke years ago to his servant, Zerubbabel.

Perhaps you are looking at where you are positioned or at what God has put in your hands for this season and it is ‘smaller’ than you were expecting.  Maybe you thought that this beginning would be different.  It has been a long time and you have been praying and seeking God for the dreams and desires He has placed on your heart to become a reality in your everyday life.

The purpose of the plumb line in Zerubbabel’s hands was to keep the walls lined up correctly, to keep the work true.  It was such a small thing, but without it, the walls of the temple would not have stood the test of time.  Zerubbabel needed this small tool to correctly finish the work God had called him to do.

Take a look at what God has put in your hands for this season. Is it an assignment that is smaller than you thought it might be? Have you viewed it as insignificant?

Can you change your perspective and see it as significant?   Can you see it as a critical piece of your story that God is using to keep the building of your life lined up with the truth of His Word?

The fact that He has placed something in your hands, no matter how small, is evidence…

That you are called.

You are not forgotten.

You have a purpose.

And there is still something amazingly significant for you to do.

Great moves of God often begin as seemingly insignificant thoughts, dreams, desires placed in the hands of those who will steward them well.  Celebrate the small.  Serve Him where you are.

And shift your eyes from the big box…to the small.

Good thing really do come in small packages, especially in our small beginnings!

“This is the word of the Lord to Zerubbabel: ‘Not by might nor by power, but by my Spirit,’ says the Lord Almighty. Zechariah 4:6