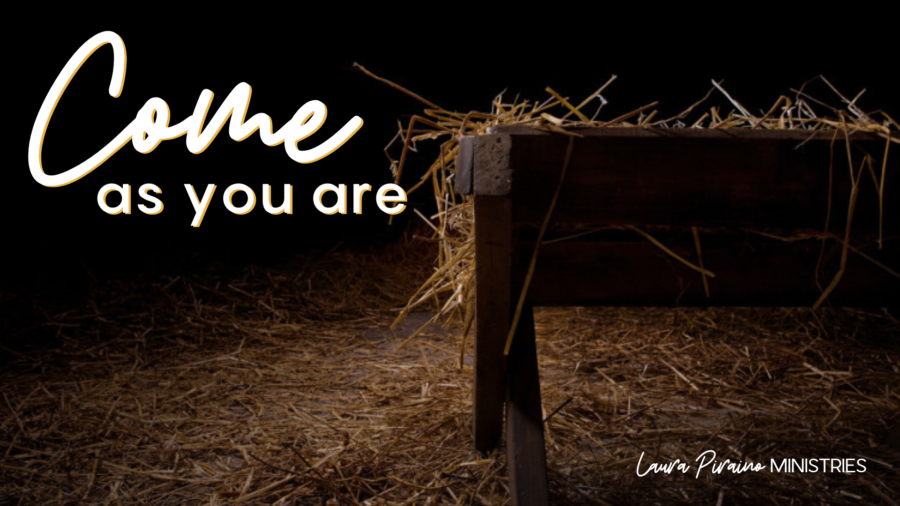 I was recently standing in line at my favorite discount store with a cart full of the treasures I had found on my journey through the overcrowded aisles.  The line was very long as it is this time of year and from my position at the back of the line I could tell I was in for a very long wait.

Conveniently, these stores recognize the fact that we are going to be in line for the long haul so they give us something to do during our wait.  Shelves are arranged for the entirety of the line stacked with last minute gift ideas, things we might have missed, things we didn’t know we need, things that we didn’t even know exist!  As we slowly make our way toward the counter, we pick up these items.  We put them in our shopping carts and quite often, if you are anything like me, by the time we reach the register, they have been returned to the shelf waiting for the next waiting shopper to do the same.

This particular day, however, something worth keeping caught my eye.  A rectangular wooden sign was burrowed behind assorted red and green decorations and all things Christmas.  In large capital letters it simply said COME AS YOU ARE.  It wasn’t a Christmas sign.  It wasn’t a Christmas decoration.  Someone had left it there misplaced among the holiday cheer but something about that phrase touched my heart.

Interesting that such a phrase would find its place among the Christmas décor.  As I look at the nativity set on the table by my tree, it appears to me that everyone kneeling at the manger that night had been invited to do just that.

Invited into the very first Christmas, each one was called to come as you are.

It is easy to see how Mary came to the stable that night.  Burdened on a path she had not planned, shamed by the religious leaders of the day, she came to give birth to the Savior, just as she was.  The shepherds came in to the manger in a similar way.  Dirty from watching their sheep, they didn’t go home to clean up quickly before meeting the Messiah.  When called to the manger, they went to the stable right from the fields.  They came to the scene just as they were.

And then there is Joseph.  He is often viewed as the silent figure in the stable.  In our house, he was the least desired to put in our nativity scene while we fought to put Mary in position or lay the baby down in the hay.  Most years we even preferred to set up the sheep before we put Joseph in place, but that night at the manger, we see a man who came to meet Jesus just like the rest.  He came just as he was.

Joseph was a young man who thought he knew where his life was going until he received the most unexpected and terrifying news a man at that time could hear.  Mary was pregnant and was said to have been overshadowed by the Holy Spirit.  With stoning the punishment for adultery, Joseph had a plan to quietly separate from Mary in an effort to save her life.

He heard what did not make sense and was told it was part of God’s plan.  He was hesitant and unsure. Joseph didn’t understand what was happening around him or if what he heard was true at all.  As he wondered whether the miracle right in front of him was really from God, an angel met Joseph in a dream.  He told this young man who had questions, who had gone the other way, that Mary was carrying the Messiah and that he would have a part in the story.  The angel told Joseph to go, to take Mary as his wife.

Joseph married Mary and when the census was commanded in the ninth month of Mary’s pregnancy, he led the way.  He took his wife on a donkey for a long, difficult ride only to find that Bethlehem was over crowded.  Exhausted and with very little means the couple went from door to door asking for a place to stay finding the only available space was a stable.

But that night in the stable, when the Savior of the world was born, Joseph watched in amazement at the miracle right before his eyes.  What God had said would be had come to pass and Joseph’s life would change forever as took on a new role as father, the earthly father of the Son of God.

Joseph didn’t have it all together.  He was just a man with flaws and weaknesses, he had doubted and he had wondered, but God had a call on his life, a purpose and a plan.  The only requirement God had on this new father was to come, to be available, to step into the place assigned to him regardless of his past, no matter the future.

He had heard unexpected news.

He doubted and ran the other way.

But God still called him to come.  And Joseph met the Savior of the world along the way.

One of the beautiful truths of the Christmas story is that we don’t need to have it all together in order to come to the Savior.  We doubt, we struggle with unbelief.  We may not know all we are to know and we may not do all we really should do.  We may be exhausted from our journeys and most of us feel completely ill equipped in the role He has called us to.

But God still calls us to come.  Just as we are.  Broken, exhausted, doubting, hurting, confused, shamed, lost.  We don’t have to have it all together in order to come closer to the Savior.  In fact, the Christmas story is all about a Savior born as a baby so He could come closer to you.

What I thought was misplaced on a shelf in a store was actually purposed to invite us to the manger.

Perhaps my new sign is a Christmas decoration after all.

This Christmas come a little closer to the Savior. Find your place at the manger.  Like those at the stable, come.  COME AS YOU ARE.

But everyone my Father has given to me, they will come.  And all who come to me, I will embrace and will never turn them away.  John 6:37